There are 5 railway stations in the Upper Highway – Kloof, Gillitts, Hillcrest, Botha’s Hill and Inchanga. The well known Umgeni Steam Railway train travels between the Kloof and Inchanga stations at the end of every month.

Of the 5 station buildings, 2 are occupied by restaurants (Kloof and Hillcrest) and the Inchanga station hosts a craft market every month. Sadly the Gillitts and Botha’s Hill stations had been empty and unused for many, many years and Botha’s Hill is derelict. The good news, well at least for Gillitts, is that a new development is being built at the station and the station itself is being refurbished. I have heard rumours that a certain drive through coffee shop will be opening up a branch at the Gillitts station. If you would like to see more about this development click HERE.

The Natal Government’s railway line reached Botha’s Hill in 1879 and at first the station itself consisted of sheds, offices and a refreshment room built out of wood and iron. A small house would also have been built for the station master. I have been unable to find out when the brick station building was built but it does appear in photos taken in 1903.

During the Anglo-Boer War (1899 – 1902) a detachment of the Natal Police were sent to guard the Inchanga tunnel. Military intelligence had received information that the Boers planned to wreck the line at the tunnel. They made camp at the Botha’s Hill Station. One evening Mr Jaggernath and his fellow railway labourers were walking home when they were shot at by a jumpy sentry. When Mr Jaggernath removed his turban later he shook out a bullet that had lodged in it.

Hearsay history says that a tin trunk was left on Botha’s Hill Station. “For many years this strong, military-looking trunk stood on the station next to the weighing machine. It was stepped over, dusted off, sat upon, but never really noticed. Occasionally it was dragged and used to keep a door ajar. It had just become part of the furniture. One day in the late 1940s, a new stationmaster demanded to know whose trunk it was and why it had been left at the station. After 45 years the answer to whose trunk it was, what it contained and when it had been left at the station was about to be answered. He forced the lock open with a crowbar and with difficulty lifted the lid. It was full of documents, and bags of silver and gold coins destined for the payment of British troops in Ladysmith during the Anglo Boer War. Apparently the money had been recorded as “having gone astray.” And then the trunk disappeared and nobody knows what happened to the trunk or its contents.”

From 1913 to August 1922 the station master for Botha’s Hill Railway Station was Thomas W. Saunders, my great grandfather. My grandmother, Adelaide Edith Saunders Drake Eyre, was born in the station masters house.

In the 1990’s a restaurant was opened and we took my grandmother there for lunch for her birthday and to watch the Umgeni Steam Train pass.

Unfortunately since the close of the restaurant in the 1990’s the station has gradually deteriorated and even the concrete in front of the building is breaking up. It is so sad to see this heritage station in such a state and I do hope that someday soon the building like the Gillitts Station will be refurbished and brought back to life. 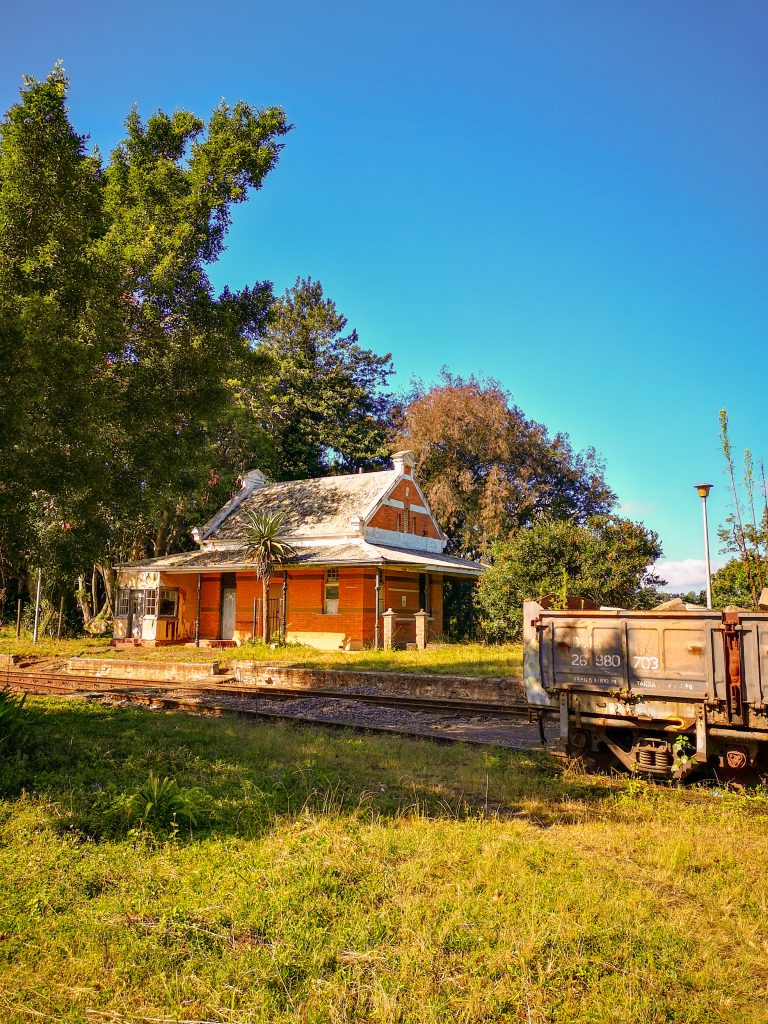