We do not take our dogs regularly to Memorial Park in Kloof, so we were pleasantly surprised at all the changes that had been made since we were last there. The playground is now fenced and I am sure parents are happy that no dogs can worry kids while they are playing and that there will be no dog mess that kids can step in. All the wooden bridges have been upgraded, wooden fencing added around the perimeter of the park, upgraded parking and a paved trail where it used to be very muddy. This major upgrade of Memorial Park was a co-operative effort between the eThekwini Parks Department and Kloof Conservancy in 2020.

Plastic packets are available at the entrances and there is no excuse not to pick up after your dogs. The park is not only a place to walk the dogs or let your kids play. It is also a wonderful place to have a picnic or bird watch. 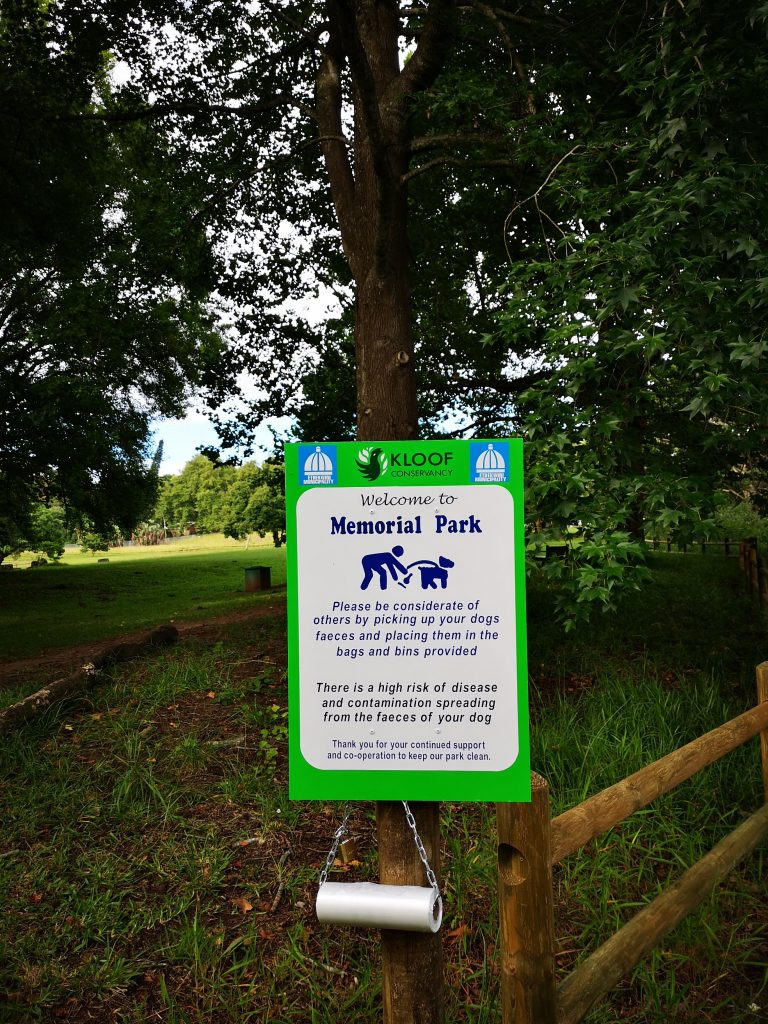 Why is it called Memorial Park?

“Memorial Park was established on 4th April 1945 on land donated by the Hickman and Johnson families in memory of their sons who died in World War II.

World War II took its toll on young men from Kloof and two in particular are directly linked to land which became Memorial Park.

On 26 Jan 1942, John Reginald Hickman, the husband of Peggy Hickman (née Gosling), and son of Henry Reginald and Phyllis Hickman was killed in action at Antelat, Cirenaica (modern day Libya). At the time he was a Bombadier serving with the 2nd Anti Tank Regiment, South African Artillery.

On 25 August 1943, Ronald Douglas Johnson, the son of Douglas Francis and Alice Jean Johnson was killed in an air-raid whilst a prisoner-of-war in Foggia, Italy. He was a Private serving with the Technical Services Corps, Union Defence Force. He was 22 years old at the time of his death. Ronald’s Road and Ronald’s Kloof in the main Kloof Gorge are named after him, both area’s having been part of his childhood “playground”.

On the 4 Apr 1945 it was recorded in the Minutes of the Building Plans and Subdivision Committee of the Kloof Town Board with regard to “D.F. Johnson: X of O (and) Hickman, Dickens & Young: Lot Q ….. Committee recommends that ….. the whole area of 49 of Q and that portion of 30 of X of O accruing to the Board be designated the “War Memorial Park”. It was a requirement of the day that, to obtain permission to develop farmland, the developer must donate a portion of the land for roads, parks and cemeteries, to the local council.

In May 1946, a Voluntary Parks and Gardens Committee for the War Memorial Park was set up. The aim seems to have been to keep it as natural as possible, with indigenous trees and freedom of movement.

The following Kloof men are known (there may well be more) to have died in World War II and it is to them that Memorial Park is dedicated:

“The responsibility for the upkeep of the park rests with eThekwini Parks Department who have done and continue to do an outstanding job by regularly mowing the grass, installing essential signage and doing general upkeep tasks. Kloof Conservancy continues to support and partly fund the ongoing maintenance and beautification of the park.” Kloof Conservancy “Memorial Park Project”

Bolt is a rescue Greyhound – his mothers and siblings were rescued from the Valley of 1000 Hills. Only him and his sister survived from the litter of puppies.

Axel’s mother came running out of burning sugar cane followed by her 7 puppies and were taken to the Animal Anti-Cruelty League. All were successfully adopted. Axel is a Greyhound-X. His mother is a Greyhound.