In March we spent a wonderful time with my aunt Merryl (Dad’s sister) who was out from Australia.  Carryn (my sister) came down from Jhb so that she could also see Merryl .  We had such fun taking Merryl everywhere we could think of – Midlands, SPCA charity shops, Animal anti-cruelty league charity shop, Lou Harvey, Waste Centre fabrics, Decorex, Fat Tuesday etc etc  One of our favourites is always the Midlands trip.

We drove up during the week while the kids were at school.  Neil actually had to fetch the kids for me as we took our time.  Our first stop was Piggly Wiggly with its wonderful array of shops.  It really is a one stop shop for the whole
family.  You can have breakfast or lunch and coffee at the restaurant, play on the putt putt course and have pizza at
the pizza place, lovely jungle gym for the kids.  There are lots of shops – gallery, deli, antiques and collectables, clothing, furniture, bath and body products, wine, books and leather shop.

It was a beautiful sunny and clear blue sky day and we took our time wandering into the shops and oohing and aahing over all the amazing items.

After Piggly Wiggly
we took a short drive up the road to go to Tsonga.  I had a R500 voucher that I had won at the
Rain Africa bloggers meet and was very keen to spend it.  We were very impressed with the Tsonga
Midlands shop and their very helpful shop assistants.  I was even more thrilled as they were having
a sale on selected shoes and I was able to get two pairs (by paying in a bit).  Merryl also bought three pairs of shoes.
On our way to the Howick Hospice shop we stopped at Treasures & Trash which is in an old railway station masters house.  This was especially thrilling for my Mom as her Grandfather was a station master.  We had to be so careful walking around in the rooms as the house is nearly overflowing with beautiful glassware and other collectables.  In an outside room is the Dargle Valley pottery.
Then it was onto the Howick Hospice Shop, SPCA charity shop and SPCA charity bookshop.  By this time we were VERY hungry!  It had already been decided that our lunch venue would be Yellowwood Cafe with its view of the
Howick Falls.  What a spectacular view it was.  I haven’t seen the falls flowing that fully ever.  We took a table
situated under the trees and placed our order.  Merryl, Carryn and I had delicious pies and my parents had the special of sausages and gravy.  It was so relaxing sitting, eating and chatting.
Our final Midlands stop was the last SPCA charity shop situated near the Howick falls.  My Mom found the most fabulous genuine leather bag there.  We were very tired and happy as we made our way back down the freeway towards home.  My car boot was laden with all the bargain shopping!
This was hardly a blip on the radar of the Midlands Meander.  There are hundreds of places to see, buy, eat and stay at.  If you are down in Durban for a visit I really encourage you to take a day trip on the Midlands Meander.  Buy the Meander map (R5) before the time if you can, so you can decide which places to stop at.  The Meander maps are available at the Moses Mabhida stadium tourist information centre.  You can also get them at most of the shops or
restaurants on the Meander.
I am hoping we can do a full Midlands Meander day in the July school holidays as I would like to go to Swissland Cheese and a few other places we haven’t been to in quite awhile. 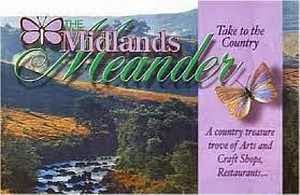