There are so many beautiful dog breeds in the world and wonderful mixtures (pavement specials) as well.  When I was growing up we had Fox Terriers and then Border Collies, both loyal breeds with lots of energy. Hubby and I both
liked Boxers and we thought we might get one,  one day. But it didn’t happen and instead we got Tyson Boerboel/Bullmastiff/Staffie/Jack Russell). A friend of our son excitedly told him about the puppies and that there was one left. Then the parents got hold of us and encouraged (nagged) us into taking the last puppy (runt) of the litter for R100. Tyson grew up into the most amazing, loyal and sweetest dog and we miss seeing his happy face every day.

In 2008/2009 we decided to get another dog and went to the SPCA to look at the puppies. We found a very sweet puppy and adopted him and named him Rocky. Sadly we did not have him for long and he died as a result from the Parvo virus. It was an awful experience. We had to burn his bedding and sterilize areas and we could also not get another puppy for at least a year to allow the virus to die off.
After the experience with Rocky I was so hesitant to get another puppy and was worried that it could happen again. I go to the SPCA shops regularly to look at the donations and chat to the fabulous volunteers that work there. One Monday while waiting for the Attic (kitchen stuff) to open, Jackie from the nursery came walking past with two puppies on her heels. So I asked her about her new puppies. She explained to me that she was just fostering them and as soon as they were old enough they could go to a home. A Greyhound Mom and her puppies (think there were 6) had been rescued by a mountain biker who had seen that the mom and puppies were in a serious condition. Subsequently 4 of the puppies died and there was only a male and female that survived. The mom had a very badly healed break in her leg which was repaired. The male was such a cute looking puppy with his brindle coat so I
took a photo of him to send to hubby. The puppies were for free to a good home.
There was a family discussion and we decided that we would take Mufasa as he was called then. This was 2010. Shew! Did we regret taking him on. He was snappy, growly and bad tempered but also very cute. You couldn’t
hug him and we had to be very careful not to put our faces too close to him. In those first two weeks I seriously thought of giving him back. (Which wasn’t going to happen obviously) I’m so glad we persevered with him as he is such a sweet boy and now loves and demands attention. He is still not very keen on hugs but at least he doesn’t snap at us anymore. Oh yes, we re-named him Bolt.
Okay, Greyhounds aren’t just grey and they come in the most amazing coat colours, there are approximately 30 recognized colour forms. Bolt is a red brindle. No, he is not a giant Whippet (asked this when we took him to
the beach recently). There are 3 similar looking dogs but all are different sizes. The smallest is the Italian Greyhound then the Whippet and finally the Greyhound. The Greyhound is the one used for racing (a horrible sport that
leads to many dog deaths). Greyhounds are known as sighthounds as they “look” for their prey and they are a very old European breed of dog. Males can reach 76cms in height and 40kgs. They are extremely fast and can reach a full speed of 70kms per hour.
They are not aggressive and do not need extended periods of exercise. In fact they are very good couch potatoes. They love the company of people and other dogs. They do not have undercoats and therefore are less likely to trigger dog allergies in humans. The lack of undercoat and very little body fat makes them more susceptible to extreme temperatures. They really do not have a doggy odour. A very interesting fact is that because of their high red blood cell count, their blood is used as a universal donor to other dogs. 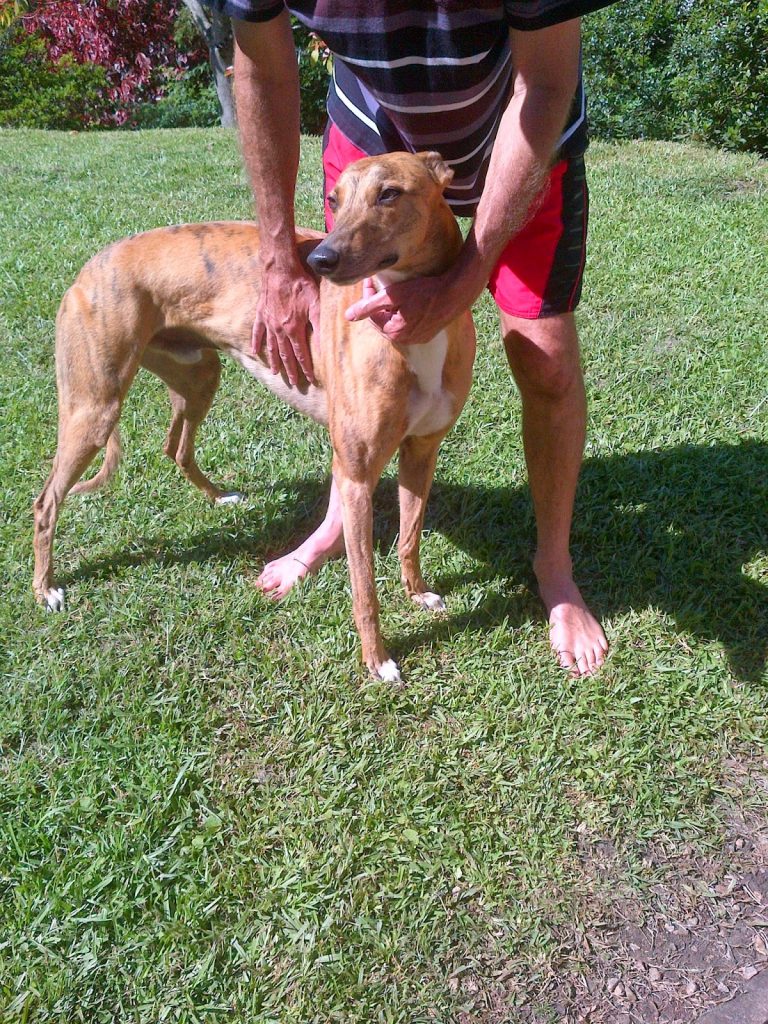 Bolt entertains us every day with his antics and we love how excited he is when we get home. I always know when Neil gets home from work as Bolt rushes to the garage and does his “get out the car” bark. He is a beautiful dog and now that we have a Greyhound I would love to own another one. There is a Greyhound Rescue Group on Facebook who do amazing work rehabilitating them and re-homing them. Maybe sometime soon we can adopt another Greyhound and Bolt is lonely by himself. Then I would have two dogs lying on my couches and trying to get on the bed.
What breed of dogs do you own?